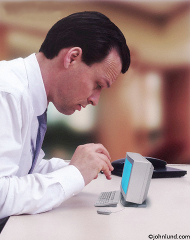 Companies spend millions on Big IT. It is obviously important to keep essential infrastructure (order processing software, back-office support, CRM tools etc.) up to date, even if I am frequently aghast at the sums of money involved. However, this blog post looks at the other end of the scale, where there is a different sort of software project costing a fraction of these flagship schemes, yet bringing real and immediate payback to companies.

I am thinking, for example, of the company where it was said to me that someone spent a day and a half each week pulling together the data for the weekly sales report in Excel. Or, of the people I have observed in more companies than I care to remember, poring over huge spreadsheets containing thousands of numbers, searching for and highlighting points of interest.

In the first case, I sincerely hope this was an exaggeration, but even so, wouldn’t it have been worth a day or two of an Excel programmer’s time to automate the process? With a minuscule investment, not only would up to a day and a half of somebody’s time have been freed per week to do something more productive (and stimulating), but as an added bonus, the sales report would probably have been available a good day earlier.

In the second example, if the person studying the spreadsheet is good at their job, they should be able to articulate the sorts of things they are seeking. Even if it took a day or two to write down all of the different patterns and outliers they were looking for, once done it would be straightforward to have them coded up to allow a computer to search for them. Not only would it find them in a fraction of a time of the human, it would do so without errors, time after time after time. Like the ‘good’ terminator in T2, it would never get bored, never desert its post and would always be there to support the business.

If businesses fully accounted for the cost of their human capital, it would immediately be obvious that these examples could generate a substantial return on investment. Unfortunately, most companies do not: for them, employees represent a sunk cost and whatever they are doing is seen as being essentially free. What this fails to account for is the fact that instead of doing something utterly menial, they could be doing something that not only adds much more value for the business but which also gives them greater job satisfaction (by ‘menial’, I mean something that can easily be automated, rather than simple). Moreover, these gains are available to every company that is not so over-staffed that it cannot find something more productive to do with the time freed up.

Another problem we encounter is that internal mechanisms often do not exist within companies to address these smaller issues. IT departments are frequently tied up with flagship projects, leaving tasks requiring a few days or weeks of effort barely featuring on the radar. If an individual contacts the IT department to ask them to help with with something that could save a few hours a week, they tend to go to the end of a very long line. So, the awesome technology sitting on their desk displays pictures of kittens, whilst they pore laboriously over enormous print-outs or waste hours copying data from one place to another.

I am far from advocating a complete takeover by computers in the workplace. However, we should recognise that there are some things at which computers excel, such as storing and retrieving data, and manipulating numbers. On the other hand, fortunately for us, there are still plenty of areas requiring creativity and an understanding of human psychology in which the brain is, as yet, unsurpassed (and long may it remain so!). All I am arguing for is to let the computers do their thing, so that we can do ours better. Beyond the simple cost savings in the examples enumerated above, making key information more widely available, whilst simultaneously freeing up people’s time to consider and act on that information, can have a transformational effect on the bottom line.

Golden Orb’s speciality is in helping companies to become more data-driven: using data and analytics to help them to take better decisions. In this field, the real benefits come not from the technology itself, but rather from the better business choices, made by more productive and motivated workers, that the technology enables. It is emphatically not about how much money you spend, but how well you spend it. Frequently, transformational results can be achieved with relatively small investment. We call it ‘micro-IT’, and in terms of ROI it is hard to beat!